Two things have always been important to Ulupreneur Vidya Madhaven: a good sense of humor and business. Born in Kerala, India, she never had any career doubts; it was just a matter of figuring out what kind of business she would pursue. Her mother worked in a bank, but Vidya didn’t quite understand how people made money just by putting it in a bank. That changed when she was eight and began selling Pokemon tazos, the small collectible round disks that are part of the game. She opened a Pokemon bank. She was amazed at how many students banked their tazos with her. Her customers would often borrow (with interest) the niche tazos to show-off or for Pokemon tournaments. Then for every ten tazos they banked, Vidya returned 11 of the collectibles to her “investors” at the end of three months. As a result, she understood how banks made money and her business boomed —until one of her teachers got wind of the operation and shut it down.

In her teens, she co-founded an internet site in India called LetsSing, which is similar to Cameo.com. She worked on it with her current co-founder Abhinav Anurag, an avid coder. Vidya calls Abhinav a “hardcore builder at heart.” The company was so successful that they struck a deal with MTV, but building the firm in the time before Zoom and widespread cell phone use became too complicated. The major cities where she needed to meet with potential customers were at least a eight hour bus ride from Vidya’s college, so they decided to shut down the company.

She decided early on that  in order to succeed, she needed to to think differently and learn everything she could about a wide variety of people and ways of thinking. It became a hobby for her to expose herself to any viewpoint different from her own and dig into it.

Continuing her entrepreneurial endeavors, Vidya tried several other enterprises; those experiences helped her realize the importance of ecosystems, which is one of the reasons she chose Stanford for business school. There, she pursued entrepreneurial clubs and dipped into several different startups. In 2021, she and Abhinav launched Schmooze, a dating app where people swipe memes based on what they find humorous. According to the Schmooze site, more than a half million matches have been made and 15 million+ meme swipes.

We spoke to Vidya about her lifelong pursuit of entrepreneurship and why, during these times, humor should be a baseline for online singles looking for a partner. 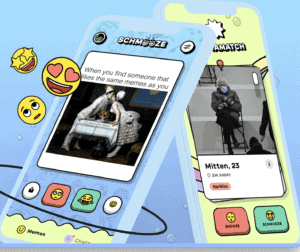 It’s a dating app that matches people based on their affinity for memes. It represents a new way to meet with people based on a shared sense of humor. We normally remember, and sometimes enjoy, two types of conversations—either the ones that make us laugh or the ones that make us cry.  I don’t want people to cry, I want people to laugh: that’s what Schmooze is about.

Why Schmooze, why now?

The world is so polarized, and there is so much negativity, and negative sentiments are everywhere. People are talking about mental health issues and being overworked, stressed, and uncertain about where things are headed … politically and economically. I just want to find an opportunity to make people laugh for 20 minutes every day.

Like any other consumer social company, I tried anything and everything that I could, from hanging posters to making an offer to entice the first 100 users: ”If you use this we’ll put you in a lottery”and give away something to users who continued on the app. What really worked was that a student at Stanford, who loved this idea, created a TikTok about Schmooze, and then it blew up. We went from 200 users to having 2,000 users in a matter of 12 hours.

Then, a woman who was interning at the Los Angeles Times and using Schmooze reached out. I was very busy at the time and told her I could do an interview at midnight. She agreed and did a short article on us in the paper. Comedian Stephen Colbert’s writing team picked it up and Schmooze was mentioned on his show. I think it’s a huge lesson about taking all the chances that you can get and creating more opportunities for the company.

Any advice for fundraising?

Definitely go for people who really care about what you’re building, helping you, and mentoring you along the way. I think the one advantage that investors bring is that they see so many entrepreneurs—and I think entrepreneurs can learn from that.

“Founders should make sure they also get the best out of investors: find investors who will be willing to guide you and pick up your call at any point along the way.”

We are a young company, both in terms of the product that we’re building and in terms of our stage. So, we often attract a lot of folks who are just graduating from college, and that population has never seen what working from an office looks like. We have an office New York City and we have one in Bangalore, India. But many folks who did their internships and/or graduated during the pandemic just don’t want to come to an office. It’s very hard, because I feel that the joy of a startup is building it together. Let’s face it, startups go through ups and downs every single day. I think the reward is to celebrate the wins—like Stephen Colbert—together, and at the same time, be with each other during the hard times. So it’s been a challenge getting everyone together in one place and we are making strides.

I want it to be the dating product for Gen Z. Previous generations have Bumble and Tinder, and sites with a lot of superficiality. I think the next generation really needs some smiles. We feel that we have a great product in our hands; everyone who uses it loves it. We just want to spread joy to as many people as we can.