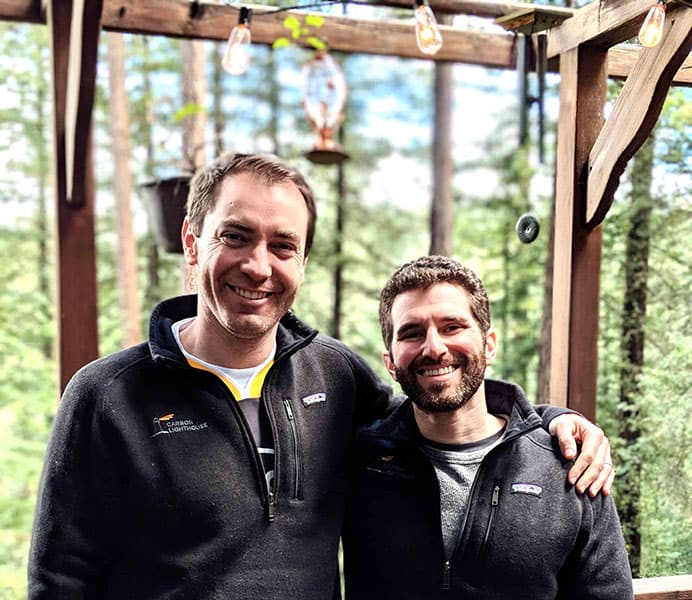 Ulupreneur Raphael Rosen, CEO of Carbon Lighthouse, grew up hearing stories about John Muir and Teddy Roosevelt, and internalized the ethos that if we don’t actively protect natural beauty and wonder, we’re going to be in trouble. His parents impressed upon him the importance of conservation and Yosemite National Park was almost always the family’s summer destination.

His father was a physicist, and Raphael studied physics as an undergrad at Harvard as well. A fellow outdoor-lover and buddy since kindergarten, Brenden Millstein became his lab partner and later his co-founder at Carbon Lighthouse. They were driven by the same mission: do something big to help reduce climate change. For several years they kicked around different business ideas of how they could apply the best physics, science, and engineering toward solving energy and climate problems.

After completing his master’s in physics, Raphael helped build Safari Energy, a solar company in New York that exited to a utility. But he and Brenden stayed in touch. Both felt renewable energy was essential, but they felt a bigger opportunity would be to take action at scale by getting building owners to de-carbonize their properties by making them more intelligent. Building operations are responsible for a huge percentage of carbon emissions and energy consumption; the duo knew that by helping building owners reduce their emissions, those owners could realize profit by cutting energy costs. They launched Carbon Lighthouse in 2010—so far, they’ve de-carbonized 600 buildings and report that they’ve cut 584K tons of carbon from the environment.

We spoke to Raphael about their work to de-carbonize commercial buildings globally, their tips for founders, and their dreams for the future.

How do you work with commercial building owners to de-carbonize?

We work with them to do three things. We use new data from their building to identify ways to improve the efficiency of their heating and cooling and lighting systems. Then we quantify the benefits of making those changes, whether it’s replacing one piece of equipment with another, or improving the control strategy for an existing piece of equipment that does heating, cooling, or lighting. We quantify that and then we help them implement it. Most importantly, we’re using our software to track that they’re actually getting that financial and environmental benefit from it.

What strategies did you use to get your first customers?

What’s your advice to other founders who are fundraising?

Understand your investors’ goals and make sure they align with your goals. Find investors who can be really valuable to you beyond a check. That takes really understanding your weaknesses: what do you not yet know? And if it’s the right investor, they can be a great partner for helping you plug your weak spots. The capital is critical and necessary, but it’s not the most valuable thing. The most valuable thing is the people who can compliment your skillset and knowledge so that you can accelerate up the learning curve.

What’s been the most difficult part of building the business?

Something new is still generally scary to a lot of people. Even if you have a product that makes people money and is fairly straightforward, it still can be hard to sell. I think it’s just general human hesitation to do things that are new. Our thesis has always been to make it easy and profitable and—shockingly—that often isn’t enough.

What’s your dream for Carbon Lighthouse?

My wish list would be to see Carbon Lighthouse help de-carbonize 25 million commercial buildings globally and do it as swiftly as possible.